An angel is a supernatural being found in all three of the Abrahamic religions. They act as an intermediary between God and humanity. They have been viewed as protectors and guides for mankind and as servants of the Almighty. Some angels are given specific names. The study of angels is known as “angelology”. Those angels which have been cast out of heaven are referred to as fallen angels.

The meaning of the word Angel is messenger which is derived from Late Greek and Late Latin terms.

In Judaism Angels are referred to as messengers of God – either a human messenger which might be a prophet or priest or a supernatural messenger such as the Logos (i.e. the ‘Word’ at the beginning of the Gospel of John).

The book of the Prophet Daniel is the first to refer to Angels by name. Gabriel (9:21) meaning ‘God is my strength’ is God’s Primary Messenger who performs acts of Justice and power and Michael which translates as ‘who is like God’, (10:13) is viewed as God’s holy fighter who stands up for the children of mankind.

Christianity has its roots in Judaism and Christians inherited the Jewish understanding of angels that they were seen as messengers of God. Later on individual angels were recognised, certainly Gabriel, Michael, Raphael and Uriel.
The New Testament includes interactions between angels and humans. In Luke 1:11, an angel appears to Zechariah to inform him that he will have a child despite his old age, so proclaiming the birth of John the Baptist. In Luke 1:26 the Archangel Gabriel visits the Virgin Mary in the Annunciation to foretel the birth of Jesus.
Angels then proclaim the birth of Jesus in the Adoration of the shepherds in Luke. According to Matthew after Jesus spent 40 days in the desert "...the Devil left him and, behold, angels came and ministered to him."

Islam
Belief in angels is fundamental to Islam. The term is exclusively used for heavenly spirits of the divine world, but not for human messengers. The Quran mentions Gabriel and Michael by name but others are only referred to by their function such as the angel of mercy and the angel of death. They are described as messengers with wings – two, three or four pairs and they have none of the human needs or frailties such as eating, drinking, getting tired or expressing anger. 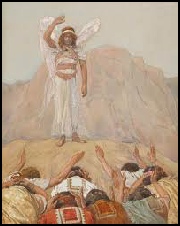 After the exile in Babylon there developed the concept of a battle between the forces of good and the forces of evil, seen as between darkness and light. This is thought to have been influenced by the Persian religious tradition of Zoroastrianism, (the same tradition probably practiced by the wise men from the east who arrived shortly after the birth of Jesus). 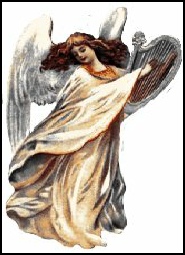 In Luke 22:43 an angel comforts Jesus during the Agony in the Garden. In Matthew 28:5 an angel speaks at the empty tomb, following the Resurrection of Jesus and the rolling back of the stone by angels.

Members of the Church of Jesus Christ and the Latter Day Saints believe that angels either are the spirits of humans who are deceased or who have yet to be born, or are humans who have been resurrected or translated and have physical bodies of flesh and bones. 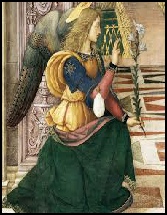 Mika’il: Michael in Christianity is a friend to humanity. He is known as the giver of rain, guards places of worship and rewards good deeds. As the Angel of Mercy, he asks Allah to forgive sins. It is believed that both the Angel Jibril and the Angel Mika’il will be present on the Day of Judgement.

Jibril: the bringer of good news.

Izra’il: the Angel of Death, who takes the souls from bodies when people die.

Israfil: will be present on the day of resurrection. It is believed that Israfil will blow a trumpet to announce the Day of Judgement.

Munkar and Nakir: are responsible for questioning the soul of a person who has died.

Muslims also believe that angels are with them at all times. They have two angels, which sit on either shoulder and are known as Al-Kiram and Al-Katibun. One records the good things the person has done and the other records the bad.

The Theory of the hierarchy of Angels

The theory, is believed by some, to have been developed by Dionysius the Areopagite who was converted to Christianity by the preaching of Saint Paul. He was one of the first Athenians to believe in Christ. After his conversion he became the first Bishop of Athens and is venerated as a saint in the Catholic and the Eastern Orthodox churches.

Seraphim are in the highest choir of the angelic hierarchy. They are the caretakers of God's throne, continuously singing "holy, holy, holy".
Cherubim These are the winged angels who are responsible for supporting the throne of God and they also act as the guardian spirits.

Thrones  The last class in the highest hierarchy of angels and is considered as the symbols of God’s authority and justice.

Dominions These are considered to send power to the management and governing authorities on earth, set up by God himself.

Virtues These angels are considered as the symbols of divine strength and are responsible for blessing the saints with the power of doing miracles like foretelling the future or healing the sick.

Powers These are considered to be the defending angels who defend humans and the cosmos against the evil. They are also responsible for providing grace and courage to worthy & deserving humans.

Principalities These angels are named as principalities, because they have command over the lower level angels. They take care that all the divine orders are being fulfilled. The angels in this class are also responsible for raising worthy & deserving people to higher & honourable levels.

Archangels They are responsible for acting as God’s messenger in the critical times. They are considered to be the heralds of good news, and reveal God’s will and prophecies to humans.

Angels These fulfil the gap between humans and God and act as a bridge between the two. They carry prayers to God and his responses & messages back to mankind.

Fallen Angels
Luke 10:18 refers to "Satan falling from heaven" and Matthew 25:41 mentions "the Devil and his angels", who will be thrown into hell. The Synoptic Gospels identify Satan as the leader of demons. Paul the Apostle states in 1 Corinthians 6:3 that there are angels, who will be judged, implying the existence of wicked angels. 2 Peter 2:4 and Jude 1:6 refer to angels who have sinned against God and await punishment on Judgement Day. The Book of Revelation, chapter 12, speaks of Satan as a great red dragon whose "tail swept a third part of the stars of heaven and cast them to the earth". Satan is defeated in the War in Heaven against Michael and his angels: "the great dragon was thrown down, that ancient serpent, who is called the Devil and Satan, the deceiver of the whole world—he was thrown down to the earth, and his angels were thrown down with him". 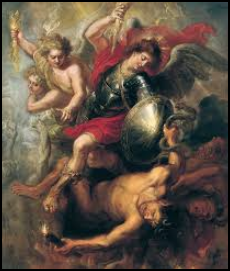