The Bishop of Worcester

John Geoffrey Inge
Bishop John was educated at  Kent College, Canterbury. He obtained a B.Sc. in Chemistry in 1977 and an M.A. in 1994 at  St Chad’s College in Durham. He completed a Ph.D at Durham in 2002. He took a Post Graduate Certificate in Education in 1979 at Keble College, Oxford and then taught Chemistry at Lancing College in Sussex.
He studied for the Ministry at the College of the Resurrection in Mirfield, Yorkshire and was ordained Deacon in 1983 and Priest in 1984.
From 1984 to 1986 he was Assistant Chaplain at Lansing College. Between 1987 and 1989 he was Junior Chaplain at Harrow School and Senior Chaplain from 1989 to 1990 here he taught Chemistry and Religious Studies.

From 1990 to 1996 he was Vicar of St Luke, Wallsend, Tyneside, where he was heavily involved in social responsibility throughout the Diocese of Newcastle.
In 1996  he was appointed Canon Missioner at Ely Cathedral where he was responsible for education as well as mission. From 1999 to 2003 he was Vice Dean of Ely Cathedral.
Between 2003 and 2007 he acted as Suffragan Bishop of Huntington, where he had responsibility for developing the Ely strategy for mission and ministry and acted as Warden of Readers. 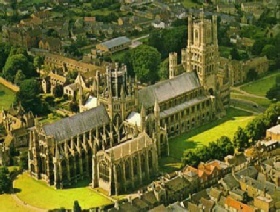 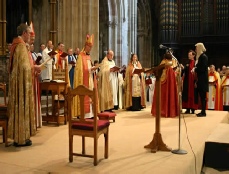 He was nominated to be Bishop of Worcester from 1st October, 2007, and enthroned as the 113th Bishop of the See of Worcester in March 2008.
Bishop John was married to Denise until her death in 2014, she was a writer with a particular interest in Thomas Traherne, the 17th Century poet, and they have two young daughters. He lists as his interests music, drama, reading, cycling and swimming. He has a fascination for international affairs and is a longstanding member of the World Development Movement and Amnesty International. In January, 2018 he married H-J Colston.

Publications
‘A Christian Theology of Place’ (Ashgate, 2003) which was short listed for the Michael Ramsey Prize for theological writing.
‘Living Love: In Conversation with the No. 1 Ladies’ Detective Agency’ (Inspire, 2007)