Clergy who died in Office

Three of our clergy died in office whilst living at Amblecote and are fittingly buried in our Churchyard.

John William Grier
Was the first incumbent of Holy Trinity and served for a period of 24 years from 1842 until 1866. He died suddenly, after preaching at divine service on 28th of January, 1866 aged 56 years. His grave, which may be found on the right of the path from the Lychgate to what is now the main entrance to the Church, is a rather impressive memorial described as "Horizontal rectangular stone base surmounted by a coffin shaped monument with a lid in cruciform shape. Old English lettering."

The following inscriptions are to found around the grave.
The Revd. JOHN WILLIAM GRIER,
first incumbent of Amblecote who died
(to die is gain, Philli. 6 21v)
suddenly on Sunday Jany. 28th 1866
in the 56th year of his age.
Remember them who have spoken unto you the word of
God, whose faith follow. Heb 13th 7v.
In memory of
JANE, widow of the Revd. J. W. GRIER
Born 28th March 1806 died 31st Decr. 1894
Love is of God and everyone that loveth
is begotten of God and knoweth God.

John Simon Boldero
By a really amazing coincidence the very next incumbent of Holy Trinity also died whilst here. This was the Reverend John Simon Boldero who served for an incredible 34 years from 1866-1900. He died at Amblecote Vicarage at the age of 69 years. His wife Emma died 22 years later aged 85 years.

Bernard Thomas White-Jones
Was the fifth incumbent of Holy Trinity and served for a period of just four years between 1908 and 1912  before his death at the age of 35 years. His grave is directly outside the vestry door next to the water tap.

The memorial takes the form of a Celtic cross on a plinth and the inscription reads as follows
Of your charity
pray for the soul of
BERNARD THOMAS WHITE-JONES
Priest
entered into rest Dec. 12 1912
Aged 35 years
Jesu Mercy 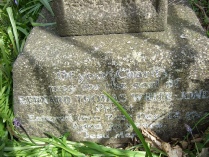