Marble Memorials
Around the Church can be found a number of memorials erected to various worthies by their friends and families. These are often rather ornate and would have been expensive in their time. Some exhibit, what today would be considered as, Victorian sentimentality or over-statement. Others are the simple words of a grieving family.

John William Grier (Priest)
He was the first Incumbent of the Parish from 1842 until 1866 when he died suddenly just after taking divine service on January 28th, 1866. He was then just 56 years old. The memorial tablet was erected by the Parish in recognition of some 23 years service to the Church in Amblecote.

William King
This simple memorial was erected to William King by his widow in sincere affection in 1850. William lived at Amblecote Hall and was presumably part of the firm of  J. & W. King who were the brick-makers who supplied the fire-clay bricks of which Holy Trinity is constructed at cost price. William died on the 16th March, 1850 aged 50 years. William King was affectionately know as "King Billie" and King William Street is named after him.

James Batson
This tablet was erected on April 4th, 1850 to the memory of a man who died in 1820, well before the Church was built, by the overseers of his estate. He left the sum of £100 the interest from which was for the use of the poor in the parishes of Amblecote and Kingswinford for ever. (In 1820 £100 would have been a considerable sum of money).

Anna Eleanora Amery
This cenotaph (or empty tomb) was erected by John and Anna Dorothea Amery to the memory of their eldest daughter who died after a short illness on August 10th, 1844, aged 16. Anna Eleanora is buried in Chelsea in London.
The wording reads 'Erected by her bereaved parents not as those who have no hope. 'The less of this cold world the more of heaven.’ 'The briefer life the earlier immortality'. 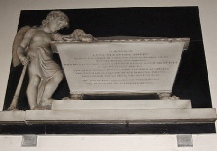 Joseph, Mary Ann & Joseph Pitman
This memorial was erected by three daughters to the memory of their parents who died in 1870 and 1871 and their brother Joseph who died in 1853 of a fever in Zante (one of the Greek islands) at the age of 23 years.
The wording mentions the daughters grateful love and esteem and in remembrance of their parents 'unremitting kindness to the poor of the hamlet' (presumably Amblecote).

Ensign Lyndon John Grier
This memorial is hidden behind the organ and is sadly impossible to photograph properly. It is in memory of Lyndon John Grier, the son of John William Grier the first incumbent of Amblecote, and 'erected by his sorrowing father'. Lyndon was wounded at Cawnpore on 28th November,
1857 during the Indian Mutiny (1857-59) and died of his wounds. He was an ensign in 34th Foot, 1st Border Regiment and was just 19 years of age.
[Ensign was the lowest rank of commissioned officer in infantry regiments of the British Army (except fusilier regiments, which always used Second Lieutenant). It was the duty of officers of this rank to carry the colours of the regiment].

Worshipful Brother Joseph Aston P.M.P.P.G.R
The stone font was given in memory of a founder Joseph Aston by the Freemasons of Stability Lodge No. 564 Stourbridge who died in 1899.

Other Memorials
In the Sanctuary there are to be found a number of brass and wooden memorial plaques.

James Foster
The most elaborate of these brasses is that dedicated to the Iron Master James Foster who was one of the largest contributors to the building fund for Holy Trinity. He also gave the cast iron railings which surround the Churchyard and were valued in their day at £500. This plaque points to the elaborate East Window which was given by his employees and a few private subscribers after his death on 23rd April, 1853.

The Twelve Boys
The large crucifix that hangs over the front altar is the memorial to twelve young men associated with Holy Trinity who died in the Great War. Their names are displayed on the brass directly below that dedicated to James Foster.
The Choristers: Charles Dean, Cyril Attwood, Samuel Morris, William Morris, Howard Edwards, Colin Brindley and Charles Davies.
The Servers: Sidney Elcock, Clarence Starling, Percy Barker and Edward Lowe.
Sunday School:   Roy Coombes
All of these names - with the exception of Samuel & William Morris - are commemorated on the Lych-gate Memorial.

John Simon Boldero M.A. (Priest)
This misericord in the south east of the nave was given in memory of the Priest John Simon Boldero, the second Vicar of Holy Trinity from 1866 - 1900, who died at Amblecote on 24th January, 1900.

Henry Milton Crabbe M.A.  (Priest)
Around the South West corner of the Church is the Walsingham Chapel. This is formed by wooden panelling surmounted by a wrought iron screen. The carved inscription on the wooden panelling reads ‘To the glory of God and in memory of Rev. H. M. Crabbe, M.A. Vicar of this parish 1913 - 1936.’

Henry Ridley
This wooden tablet commemorates the gift of the altar in memory of Henry Ridley who was Vicar's Warden from 1889-1923. It also refers to his wife Esther.

Sarah Lewis
This statue was given to the glory of God and in memory of Sarah Lewis who died on 19th May, 1950.

Joseph & Jane Webb
This rather splendid lectern in the form of an eagle with outstretched wings, which form the rest for the book, was given in memory of Joseph and Jane Webb in 1901.

John Woods
This rosewood representation of the head of Christ with the Crown of Thorns was given in memory of John Woods, who died in 1977, by his son Michael and wife Mary.