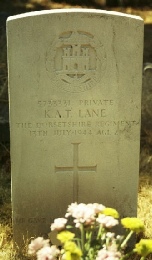 We have a number of “War Graves” in Holy Trinity Churchyard and some casualties have been buried in, or are commemorated on, family plots.
Mr. Ian Williams has located memorials in the Churchyard to the fallen of The Great War (1914-1918) and the Second World War (1939-1945). He has written an excellent booklet entitled 'War Memorials of Amblecote Part 2 The Men and Women' which is published by the Amblecote History Society.