The Church of England

The Church of England, or Anglican Church, is the officially established Christian church in England. The Monarch is its Supreme Governor and the Archbishop of Canterbury is the Primate of all England. The Church of England believes itself to be both Catholic and Reformed and has over thirteen million members.
Catholic - in that it views itself as  part of the universal church of Jesus Christ in unbroken continuity with the early apostolic and later medieval church, formalised in the Apostles', Nicene, and Athanasian creeds.
Reformed - to the extent that it has been shaped by some of the doctrinal and institutional principles of the 16th century Reformation demonstrated in the Thirty-Nine Articles of religion, and by the customs and liturgy of the Church of England, as expressed in the Book of Common Prayer. Church of England doctrine can be summarised in its canon law. "The doctrine of the Church of England is grounded in the Holy Scriptures, and in such teachings of the ancient Fathers and Councils of the Church as are agreeable to the said Scriptures. In particular such doctrine is to be found in the Thirty-nine Articles of Religion, The Book of Common Prayer, and the Ordinal." (The Ordinal is The Form and Manner of Making, Ordaining and Consecrating of Bishops, Priests and Deacons). Anglicanism can therefore be described as 'Reformed Catholic' rather than Protestant. The Church of England is a wide church which is able to accommodate those who are “high church” or Angle-Catholic, those who are “low church” or Evangelical and those who are “broad church” or Liberal
It is an Episcopal church in that the leadership is undertaken by Bishops.

The Church of England is based on small geographical areas called Parishes, each served by a Parish Church. Several parishes are grouped into a Deanery presided over by a Rural Dean (who is also the incumbent of one of the parishes) and governed by Deanery Synod comprising both members of the Clergy and of the Laity.
A number of Deaneries form part of a Diocese (or See) each of which has a Diocesan Bishop who may be assisted by one or more Suffragan (or assistant) Bishops and a number of Archdeacons. There are forty four Dioceses in the Anglican Communion including two which are not in the United Kingdom. The forty-four Dioceses are divided into two Provinces. Holy Trinity is the Parish Church of Amblecote, in the Deanery of Stourbridge, in the Diocese of Worcester, in the Province of Canterbury. We have a Diocesan Bishop - The Lord Bishop of Worcester, a Suffragan Bishop of Dudley, two Archdeacons - Archdeacon of Dudley and Archdeacon of Worcester.

The House of Lords (as of January 2015)
Only twenty-six of the forty four bishops and archbishops are permitted to sit in the House of Lords. The Archbishops of Canterbury and York automatically have seats, as do the Bishops of London, Durham and Winchester. The remaining twenty one are appointed according to the date of their consecration. The Bishop of Sodor and Man and the Bishop of Gibraltar in Europe may not sit as their dioceses are outside the United Kingdom.
Those Bishops who sit, at present, in the House of Peers are: Birmingham, Bristol, Canterbury, Carlisle, Chelmsford, Chester, Chichester, Coventry, Durham, Ely, Gloucester*, Leeds, Lincoln, London, Newcastle, Norwich, Oxford, Peterborough, Portsmouth, Rochester, Salisbury, Southwark, St Albans, Winchester, Worcester and York.
*First woman Diocesan Bishop was accelerated to the House of Lords under ‘The Lords Spiritual (Women) Bill’ 2015. 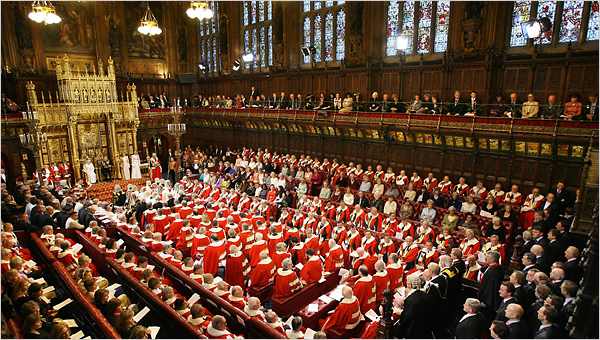 The House of Peers in the Palace of Westminster