The organ was built by J. Nicholson in 1849 and dedicated in that year on October 28th. It was purchased by public subscription at a total cost of £210.00. The organ would have been pumped by hand and the original mechanism is still attached and, it is believed, could still be used. The organ was originally placed in the gallery at the west end of the Church and was moved and placed in the vestry in 1877. The height of the vestry had to be increased to provide accommodation. In 1900 the instrument was again moved to where it now stands in the North East corner of the Church. In 1906 new action, parts and a new stop "the Great Fifteenth" were incorporated by the firm of Norman and Beard.

The organ was cleaned in both 1922 and 1942 and two stops were added a "Harmonic Flute" and an "Octavin". In 1977 the organ was again cleaned and overhauled and the "Great Clarionet" was replaced by a two rank "Mixture". More recently the organ was again cleaned, the old "Dulciana" stop was converted to a "twelfth" and two new stops, a "Quaint" and "Choral Bass", were added to the pedal department which was considered to be a rather weak section of the instrument. In 1993 the pedal action was converted from mechanical to electric. In 1994 the "Cornopean" stop which had never proved satisfactory was replaced with a "Trumpet". The work from 1977 until 2008 has been undertaken by Hawkins (Organ Builders) of Lichfield.

In October, 2008 work to carry out a thorough regulation of the action coupler mechanisms, regulation and adjustment to the reeds and finely tuning the instrument was undertaken by Trevor Tipple (Organ Builder) of Worcester, who was subsequently appointed by the P.C.C. to execute regular tuning, maintenance and general care of the instrument.

In early 2017 one of the bellows (for the Great) had to be removed and the workings replaced as the instrument was losing air, this also meant that accurate tuning was impossible.

For more information about the organ by Mark Cyphus FRCO. 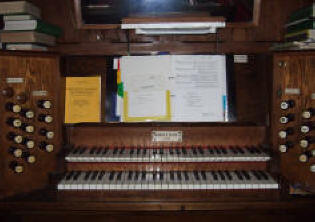 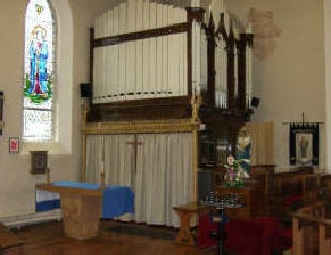